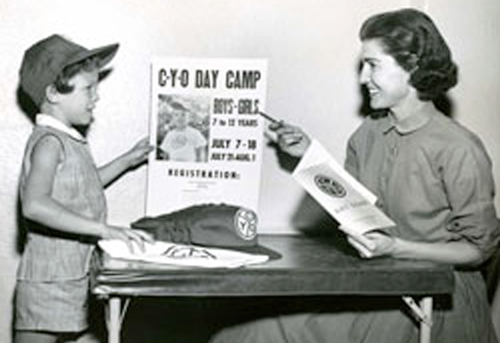 In the early days of Los Angeles, Catholic women organized a charitable society to provide care for the homeless and the poor in an area of downtown Los Angeles that was known as Charity Street.

A History of Catholic Charities of Los Angeles, Inc.

In the early days of Los Angeles, Catholic women organized a charitable society to provide care for the homeless and the poor in an area of downtown Los Angeles that was known as Charity Street. Relief was offered through soup kitchens and food pantries. The various Catholic charitable groups that were providing services throughout the city were formally organized by the Church as the Bureau of Catholic Charities in 1919. The agency was founded with the purpose of meeting the immediate needs of families and initiating new service programs as required.

In 1936, the Archdiocese was formally elevated from the Diocese of Los Angeles – San Diego and the Catholic Welfare Bureau was established, replacing the Bureau of Catholic Charities. It served the extensive territory of Monterey, Santa Barbara, Ventura, Los Angeles and Orange counties. It was incorporated in the State of California in 1937. In later years, Monterey and Orange counties developed their own Catholic Charities’ organizations.

In 1985, the Catholic Welfare Bureau was renamed Catholic Charities of Los Angeles, Inc. It is the social service arm of the  Archdiocese of Los Angeles. To most effectively manage the delivery of social services, Catholic Charities’ operations are divided into five service areas that coincide with the Pastoral Regions of the Archdiocese. This structure enables the agency to maintain a presence in communities with the greatest needs while sharing common resources and administrative overhead.

Catholic Charities strives to find permanent solutions to crisis situations by offering clients the tools and resources they need to achieve greater self-reliance and stability in their lives. Services are provided to anyone who comes to the agency in need, regardless of race, ethnicity, gender, age or religious belief.

During the past fiscal year, Catholic Charities delivered over 850,000 services to almost 100,000 individuals, most of whom were women and children. The agency is accredited by the Council on Accreditation for Children and Family Services and, for the eighth time, earned the coveted 4-Star Rating from Charity Navigator, an independent charity evaluator, for its commitment to accountability and transparency.